These docs refers to the version 2.0.0. Make sure you’re under the good version by typing [p]cog update.

This is the guide for the roleinvite cog. Everything you need is here.

[p] is considered as your prefix.

To install the cog, first load the downloader cog, included in core Red.:

Then you will need to install the Laggron’s Dumb Cogs repository:

Finally, you can install the cog:

The cog is not loaded by default. To load it, type this:

You can link many roles to multiple invites, so you can imagine something like “click here if you are an engineer, else click here if you’re an architect”, and make roleinvite give the engineer or architect roles.

Here’s a schema for a better understanding: 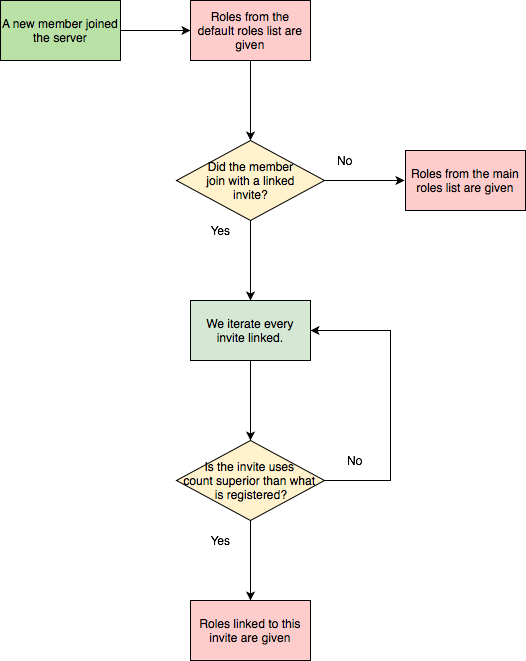 Here’s the list of all commands of this cog.

This is the main command used for setting up the code. It will be used for all other commands.

Link a role to a Discord invite or a default autorole.

You can link more roles by typing the command with the same argument.

Unlink a role from an autorole. If the role is not given, the entire autorole will be removed.

List all of the existing autoroles on the guild, with their linked roles.

Enable or disable the autorole system.

If it was removed without your action, that means that the bot somehow lost its permissions. Make sure it has the good permissions and enable it again.

Your question is not in the list or you got an unexcpected issue?

You should join the Discord server or post an issue on the repo.

Can I make it so the bot adds x roles if the invite used is unknown?¶

Yes, by using the main value instead of using a discord invite when creating a new invite link. See roleinviteset add command’s arguments for more informations.

Can I make it so the bot always adds x roles, regardless of the invite used?¶

Yes, by using the default value instead of using a discord invite when creating a new invite link. See roleinviteset add command’s arguments for more informations.

Can I make a custom welcome message for each invite link?¶

Not for now. I’m thinking about interacting with another package for that, but that’ll require an API, which is rare with cog creators, and creating my own welcomer system is a lot of work.

This may be available in a future release.

The bot suddenly stopped adding roles to the new members¶

The bot will automatically turn off the autorole system if he lose the Manage sever or the Add roles permissions, which are absolutely necessary for the cog.

If you added the permissions back, enable the autorole again with the command enable.

Some roles are not added to the new members¶

Modify the role hirearchy and make sure all necessary roles are below the bot’s highest role. If it still doesn’t work, try to link the role again.

An invite link was removed without any action¶

Invite links will be deleted if the invite doesn’t exist anymore (manual delete or invite expired).